What Does it Mean When a Rabbit Licks you?

You adore your pet rabbit and try to show it affection as much as possible. They will lick you on occasion. When a rabbit licks you, what does it mean? Is it possible that they’re attempting to show you affection, or is there something else going on?

When a rabbit licks you, it is an act of love. Your rabbit’s confidence and affection for you are shown by a little lick. It may be a sign that they want some affection in return, usually in the form of being petted.

Why Do Rabbits Show Love by Licking? 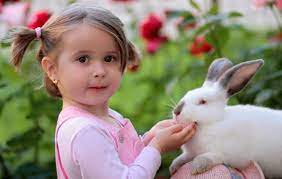 When a rabbit licks you, it means you’ve done well to win the confidence and affection of your bunny. It resembles the lick of cats or dogs, which are popular household pets. It’s a positive thing, and it should be treated as such.

Why do rabbits lick, to begin with? It all goes back to bunny herd behavior. Wild rabbits will congregate in a warren, an underground enclosure. Since they are social animals, they would be affectionate with one another. Licking is one way that rabbits express their love for one another. It also serves as a form of grooming.

Rabbits that have been domesticated would always want to express their affection. When they see someone they care about, such as you, their little tongue pops out and they give you a lick.

How Else Can You Know If Your Rabbit Likes You? 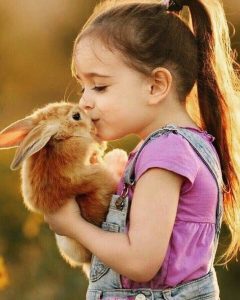 Rabbit licking is the desired sign of affection that not all pet rabbits show. Though this is a positive indication that your rabbit likes you, it isn’t the only one. Rabbits are prey species, so they are naturally wary of danger.

To be frank, the fact that your rabbit does not panic as you enter their cage shows that they are at ease with you. It’s a sign that your rabbit likes you if they let you treat them without fuss, or if they voluntarily approach you or hop into your lap.

You should also be on the lookout for any more subtle habits. “Chinning” is another affectionate trait they share with a cat. This is when they rub their chin against you, as they can do with their cages or other rabbits. They do this because they have a gland there that emits a scent that alerts other rabbits to the fact that you’ve been claimed!

Other indicators include them lowering their guard in front of you. And if they don’t groom you, the fact that they groom themselves makes them more insecure. If they clean themselves in front of you on a regular basis, it’s a sign that they no longer regard you as a threat.

When they “flop” by lying down in front of you, it’s another cute sign of confidence. This is another thing that would be dangerous to engage in if a predator were to pass by. You can usually tell how they feel about you based on their body language. It’s fairly simple to differentiate between a rabbit who is happy to see you and one who is paranoid and hides every time you pass by their enclosure.

What Would You Do To Make A Rabbit Feel More At Ease? 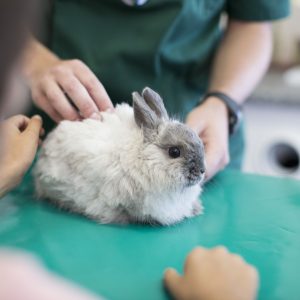 If your Rabbit is still tense, it’s a sign that its body is under a lot of strain. Stress is bad for everyone, but a rabbit’s fragile body is particularly susceptible to its negative effects. It’s perfectly natural for your Rabbit to take some time to adjust to their new surroundings (and owners), but some take longer than others. Unfortunately, there is no magical way for you to inform your rabbit that it is safe.

Here are some suggestions to help your rabbit feel more at ease, happy, and at home in his or her surroundings.

If a Rabbit is pushed out into the open, they are likely to become more anxious, particularly at first. It’s a good idea to provide them with a hiding spot or shelter so that they can retreat if necessary. You will find that your rabbit no longer uses it as time goes by, but it is a valuable investment in the beginning.

Rabbits tend to become bored as time goes on. They need to be amused, and if they are bored, they will show behavioral problems. Filling their habitat with toys will help to create a more relaxed atmosphere for them.

You must be polite to your Rabbit if you want them to bond with you. Make an effort to talk with them on a regular basis, and be careful if they are anxious. Being quiet and not pressuring your rabbit to be petted or treated if they don’t want to is also crucial to note.

If you have other pets in the house that aren’t rabbits, it’s a good idea to keep them away for a while, as an excited dog or cat can cause additional stress. Try to explain these topics to the family’s children. Bear in mind that if a nervous rabbit gets frightened, it will bite an excited boy. 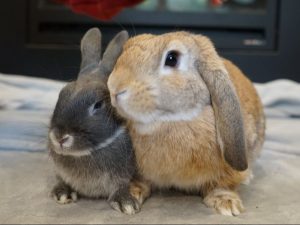 Rabbits love having a partner to play with. It is recommended that at least one other rabbit be kept in the pen (note they can get territorial and this is something you must closely monitor). They look up to one another and having each other will help boost their spirits. Furthermore, if one of the rabbits has already warmed up to you, the other might follow suit.

It goes without saying that a good rabbit is one who is happy. Make sure they are fed well and on a regular basis, and that their cage is kept clean. Be sure to do this many times a week to keep your Rabbit’s habitat safe, sanitary, and comfortable to live in.  Your Rabbit(s) will know you’re the one doing this for them after some time, as long as you take care of them. For your efforts, you will be praised.

In conclusion, rabbits are wonderful creatures who express their affection by licking. Light nipping, playing, deep sleeping, and flopping are only a few of the other signs of bunny love to keep an eye out for.

However, if your rabbit is crying, grinding his teeth, or grunting, he or she is most likely nervous, unhappy, or sick. The best way to keep your rabbit happy and safe is to be mindful of these warning signs.

https://www.rabbitproducersassociation.com/what-does-it-mean-when-a-rabbit-licks-you/https://www.rabbitproducersassociation.com/wp-content/uploads/2021/04/What-Does-it-Mean-When-a-Rabbit-Licks-you-1.jpghttps://www.rabbitproducersassociation.com/wp-content/uploads/2021/04/What-Does-it-Mean-When-a-Rabbit-Licks-you-1-150x150.jpg2021-04-21T07:18:56+00:00Netherland Dwarf RabbitUncategorizedYou adore your pet rabbit and try to show it affection as much as possible. They will lick you on occasion. When a rabbit licks you, what does it mean? Is it possible that they're attempting to show you affection, or is there something else going on?  When a rabbit...Netherland Dwarf Rabbit domains@dmhubtraining.comAdministratorNetherland Dwarf Rabbit 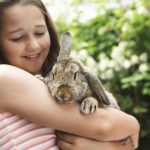 How To Take Care Of A Bunny? 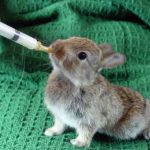 What To Feed Baby Rabbits Without A Mother? 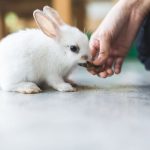 How To Stop A Rabbit From Biting?

« How To Stop A Rabbit From Biting?
What To Feed Baby Rabbits Without A Mother? »